The Costa del Sol property market, which in 2015 began a period of marked recovery from the earlier nancial crisis and then peaked in 2017-18, saw a drop-off in the demand that had reached very high levels between 2017 and the first half of 2018. Growth slowed down from H2 onwards, and this trend has continued into 2019, suggesting the market has reached a new stage in the successive progression from crisis to recovery and strong growth to a lower but continued level of expansion.

In this overview for 2019 we look into the reasons for the latest shift from rapid development to a slower pace of growth and attempt to chart the medium to longer-term prospects for the region’s property sector. 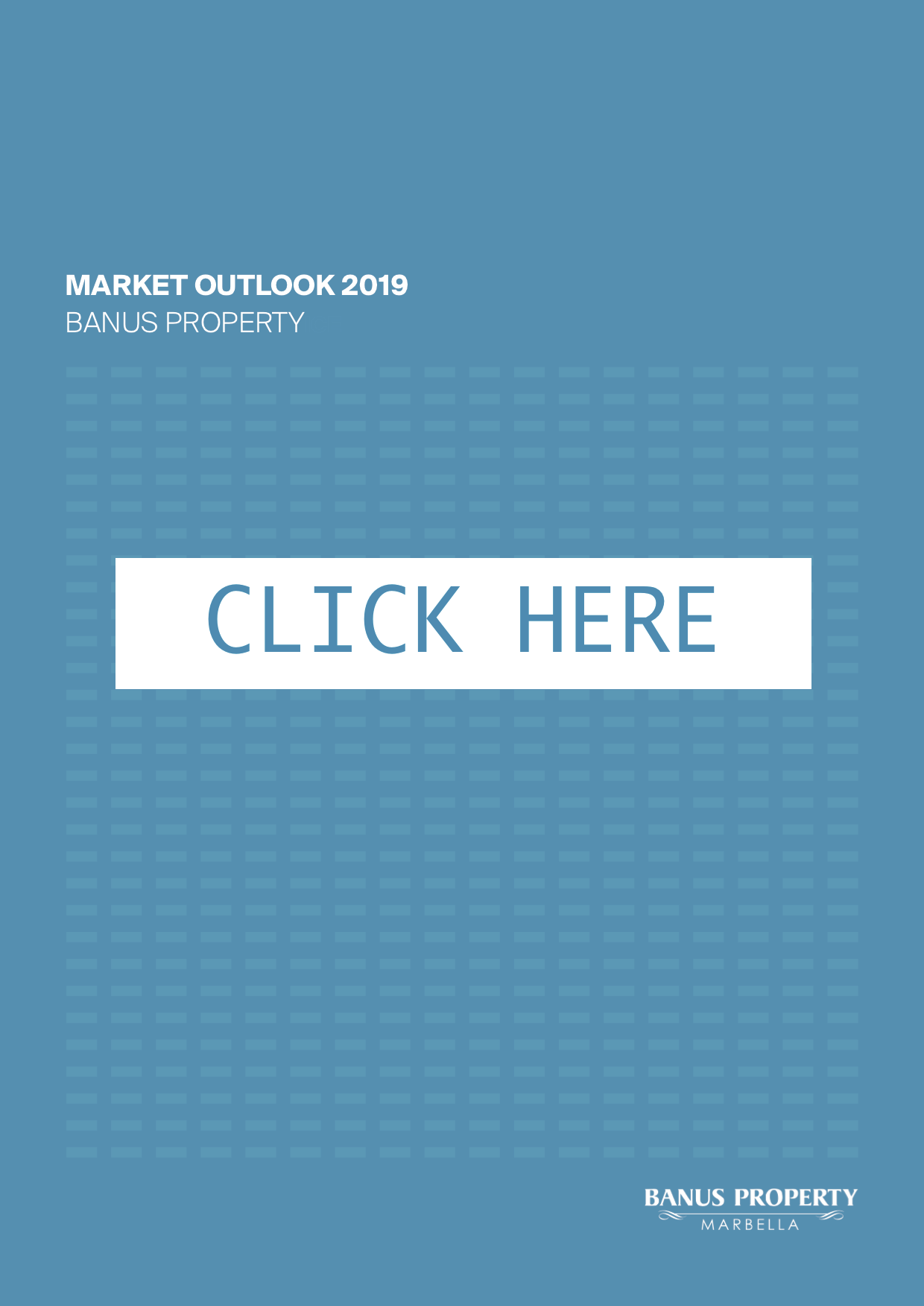 The first thing one thinks of in relation to a slowing down of European economies and sectors such as the real estate market of the Costa del Sol is Brexit, the secession of the UK from the European Union. It is true that there was an immediate reaction, particularly among British buyers, in the aftermath of the June 2016 UK referendum that led to the Brexit path, but equally noticeable is just how quickly the market recovered over 2017 and 2018, and in fact recorded another year of strong growth when seen over the whole 12-month period.

For much of the period since the referendum then, Brexit has had surprisingly little impact on our market, but now, with the cut-off date looming and no clarity existing on the subject, it is the uncertainty that is producing a form of paralysis in which buyers, investors, inventory planners and even consumers and tourists are holding back and waiting to see what will happen. There will be an impact however it turns out, but it seems the worst one is being seen during this period of impasse.

That said, our own market is more diversied than ever, with Scandinavian and Belgian buyers taking over from the British to lead the market. Russian homebuyers are slowly trickling back and new, modern middle-class families from Morocco and the Middle East are becoming a growing source of clients too – though their demand is very much focused on areas such as the Golden Mile and Puerto Banús.

Another explanation for the apparent slowing down of demand can be found in the dynamics between these three classic elements. In the years following the global nancial crisis there was a period during which virtually no new properties were built on the Costa del Sol. By 2010 un nished and repossessed homes were being mopped up by buyers and investors driven above all by bargain opportunities, but it didn’t take long for the lack of new-build homes between 2008-2014 to a ect the market.

By 2013-14 the shortage of modern villas and apartments that complied with the new architectural styles and technical amenities of the day was beginning to tell, as the emphasis shifted from circling bargain hunters to new buyers from Scandinavia and north-western Europe looking for modern lifestyle options. What happened next began as a trickle and has since led to a new growth phase characterised by modern, new-built properties that are symbol- ised by their white-plastered rectangular geometry. The first new developments were soaked up by a market desperate for this kind of real estate, and this appetite continued unabated until midway last year, when the rate of growth began to slow down.

One of the reasons is a natural slowing down of demand levels that were unsustainable over the long run, a desire for a greater variety of styles and property types, and above all an interplay of oversupply of such midrange apartments and villas, and the fact that prices have risen too rapidly for developers and homebuyers alike. A sign of this is the fact that both private and institutional investors are beginning to retract from the market if they own land in less desirable areas, having done very well up to now. In essence, there are too many new developments of the same kind on offer and they are in danger of becoming too expensive to sustain high demand levels. This again, is driven by rapidly rising land and construction costs for developers, who are seeing their margins under pressure amid a general shortage of skilled labour.

The best development land and prices went in the early days of the recovery and now it is increasingly difficult to find suitable options for the right amount. In a market where end-buyer demand is real and lifestyle-orientated, not speculative or based on flipping, high square metre prices and over-supply of a relatively narrow range of property options are slowing down growth.

Average prices for new-build apartments in Estepona frontline beach areas range between €6.000-€10.000/m2, or around €2.500/m2 for new apartments to the west of Estepona in golf areas. To the east of the town in areas such as the New Golden Mile that are close to services, prices range from €3.000 to 3.500/ m2. New-build villas in the Estepona golf area go for €3.000- €5.000/m2, with most of the offer concentrated in east Estepona developments such as Los Flamingos Golf, El Paraíso Golf, La Alquería and Atalaya. 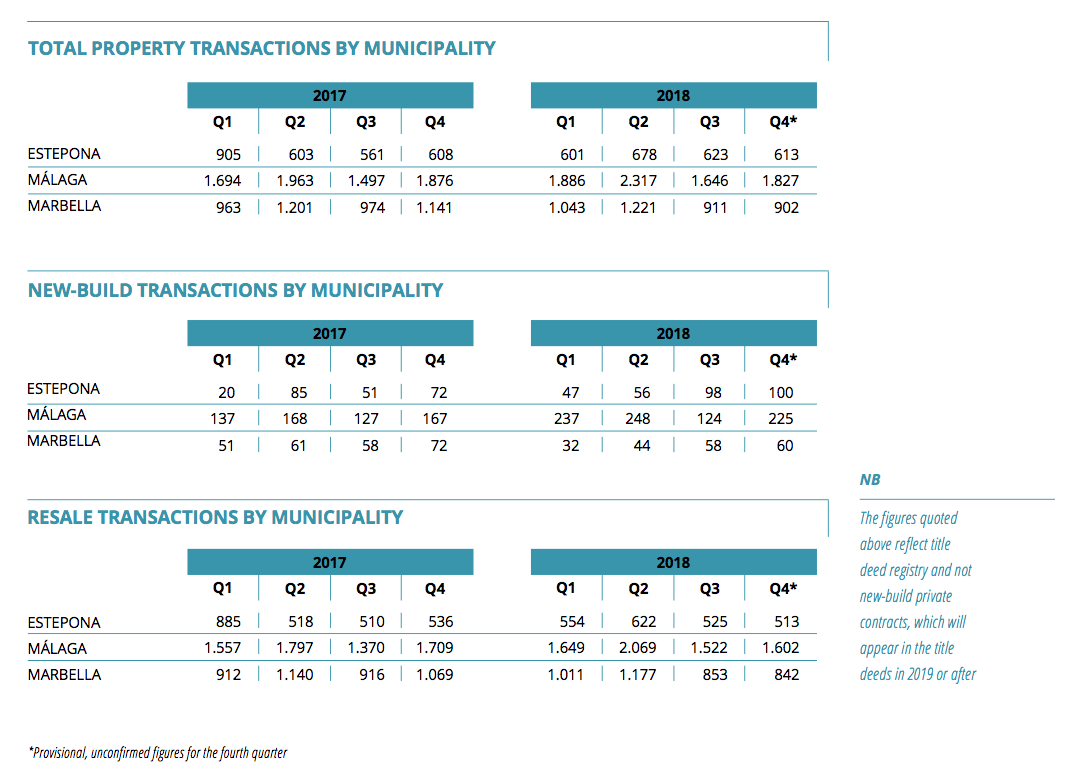 Puerto Banús is a very specific sub-market of the overall Marbella property sector, and one with its own well-defined client base. The latter consists of people who wish to be close to the glamour of this location, with its marina, shopping, dining, beach clubs and nightlife, and though they come from a very wide range of countries the classic sources are Russia, Spain and the Middle East.

In supply terms the lack of new land in Puerto Banús and the limitations stemming from Marbella’s PGOU (urban planning) issues effectively make this an established market focused upon resale apartments and also villas on its periphery. In Nueva Andalucía, which lies within the Puerto Banús zone, there has been a considerable amount of investment in modernising, upgrading and redecorating existing properties, and this has provided a rejuvenating injection of ‘new’ stock into the market. Nueva Andalucía is the centre of this activity as the lack of available land and the demand for modern villas in the €1,5-€2 million range, or above, has attracted investors who specialise in sourcing well-positioned older properties and rebuilding them into contemporary homes.

Such properties are eagerly snapped up, and overall demand for this very specific location remains consistently strong, though some balk at the asking prices where others are attracted by very high rental returns. Puerto Banús is very much a lifestyle and holiday home market, with very limited new supply and sustained demand for good quality, reasonably priced apartments, penthouses and to a lesser extent villas.

The higher prices per square metre realised here – caused by higher demand than supply – stimulate a solid resales market that does, however, not leave much space for investor/renovators. Instead, many existing homeowners and new buyers are modernising and redecorating Puerto Banús properties for their own enjoyment and property values.

What’s more, many of the Puerto Banús urbanizations we specialise in, such as Andalucia del Mar, Playas del Duque, Medina Garden and El Embrujo, are newer and well-maintained, so the case for renovation is primarily driven by optimising high rental income potential. However, it is important to note that there can be a large variance in m2 prices not just between different developments in Puerto Banús, but even within them. The most exclusive, best-located complexes with sea views and luxury amenities attain the highest values, as do the best-positioned apartments and top-floor penthouses within a complex. The higher-lying properties in the best parts of a complex that o er the best views, amenities and space, and are in the best condition will command a high m2 price, but vendors must take all these factors into account when setting an asking price and always remember that in the current market you can sell as long as you offer the buyer value for money.

PROSPECTS FOR THE MARKET

External political-economic factors, high prices and a possible oversupply of midrange apartments and villas are slowing down the market right now, especially in new areas not yet consolidated. Positive factors are the lifestyle and security of this region, which continues to drive a buoyant long-term rentals and strong holiday rentals market, and as a result of which demand for homes in the Golden Triangle (Marbella, Estepona, Benahavís) remains consistently strong.

We need more diversi cation of offering; in style, concept and detail, and also developers brave enough to embark upon true luxury, as defined by space, materials and attention to detail. Top end projects such as Emare and The View continue to do well because the provide a rare top-end modern apartment option for people who want the luxury of a villa in a penthouse setting. Niche products like this show that there is, if anything, a shortage of such homes, and that quality sells even at a premium.

In spite of this, the market in general needs to see price growth slow down if it is not to become a hindrance to sales. If we focus on quality, creativity of our offering and value for money, buyers from across Europe and the world will continue to seek out the very special lifestyle of this region. If not, up-down cycles of the past may very well be repeated in the coming years. 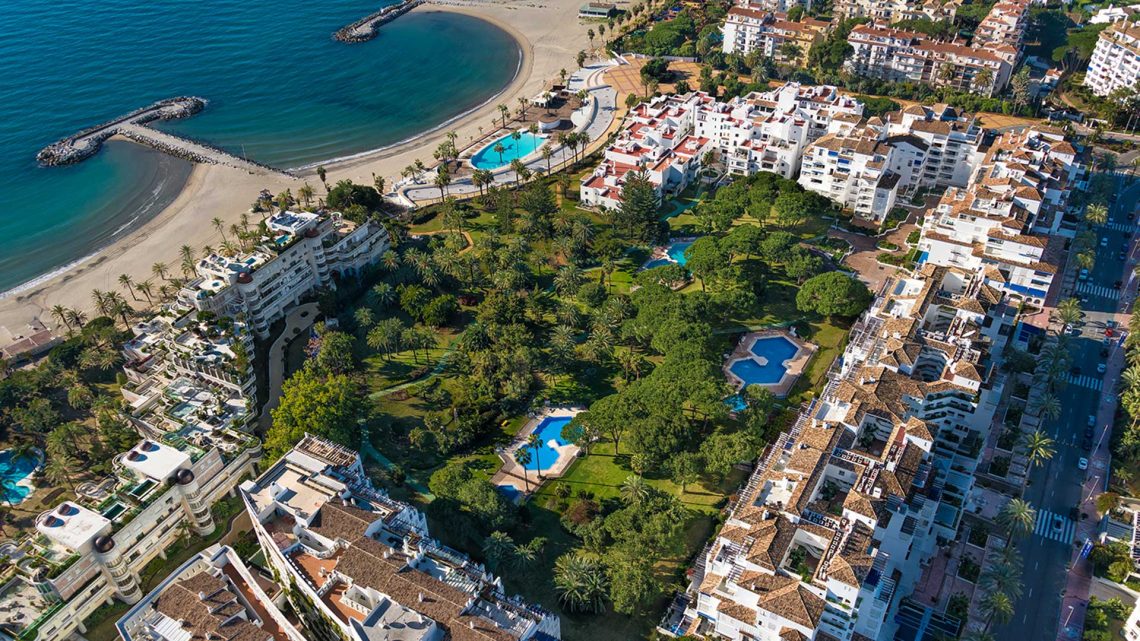 We see no crisis on our doorstep, just a correction that follows the laws of supply and demand, and in so doing a ects a much-needed adjustment of prices, some of which have been growing too rapidly in recent years. This applies especially to land values, which have limited the investment potential, but also to construction costs and ultimately to sales prices of properties in all but the most in-demand areas like the Golden Mile and Puerto Banús. For upcoming but still less established areas, such as the New Golden Mile, Atalaya, La Alquería, and West Estepona, as well as parts of Benahavís a slowing down of new projects and of price rises will be beneficial in the longer run.

It is therefore important especially for owners of existing properties not to base their asking price, be it nominal or m2, on those of new-build villas or apartments, but to adjust downwards. These are the conditions of the market right now. If your home is well-located, well-maintained, attractive and easy to update and modernise, it’s asking price can be nearer that of a modern one, but if it is located further out, is older and perhaps not in the best condition it will have to be re ected in the price. Remember that this is neither a buyer’s nor a seller’s market, but a pretty well balanced one in which not speculation but enduser lifestyle is motivating buyers. Factor in a renewed sense of value across the board and they will respond.

Banus Property is a specialist in Puerto Banús real estate as well as the lifestyle and market conditions of this location. We offer expertise, local knowledge and a truly selective, handpicked portfolio of private properties offered for sale and rent.

Jesús García is an experienced real estate agent with over 15 years’ experience in luxury property sales in Estepona and Puerto Banús. He dedicates himself entirely to a limited number of specially selected properties and urbanisations in these areas, and in so doing can provide homeowners with the time, expertise and personalised service required to achieve results.

Jesús is also an expert in property management and investment advice, resale properties, the marketing of new projects, land acquisition and rural properties. He leads a young team of highly qualified professionals committed to the values of the company – in other words, quality personal service.

A certified member of MLS Agora – Costa del Sol, Jesús García is passionate about his profession, dedicating his leisure time to family, friends, beach and mountain walks in the region he loves. 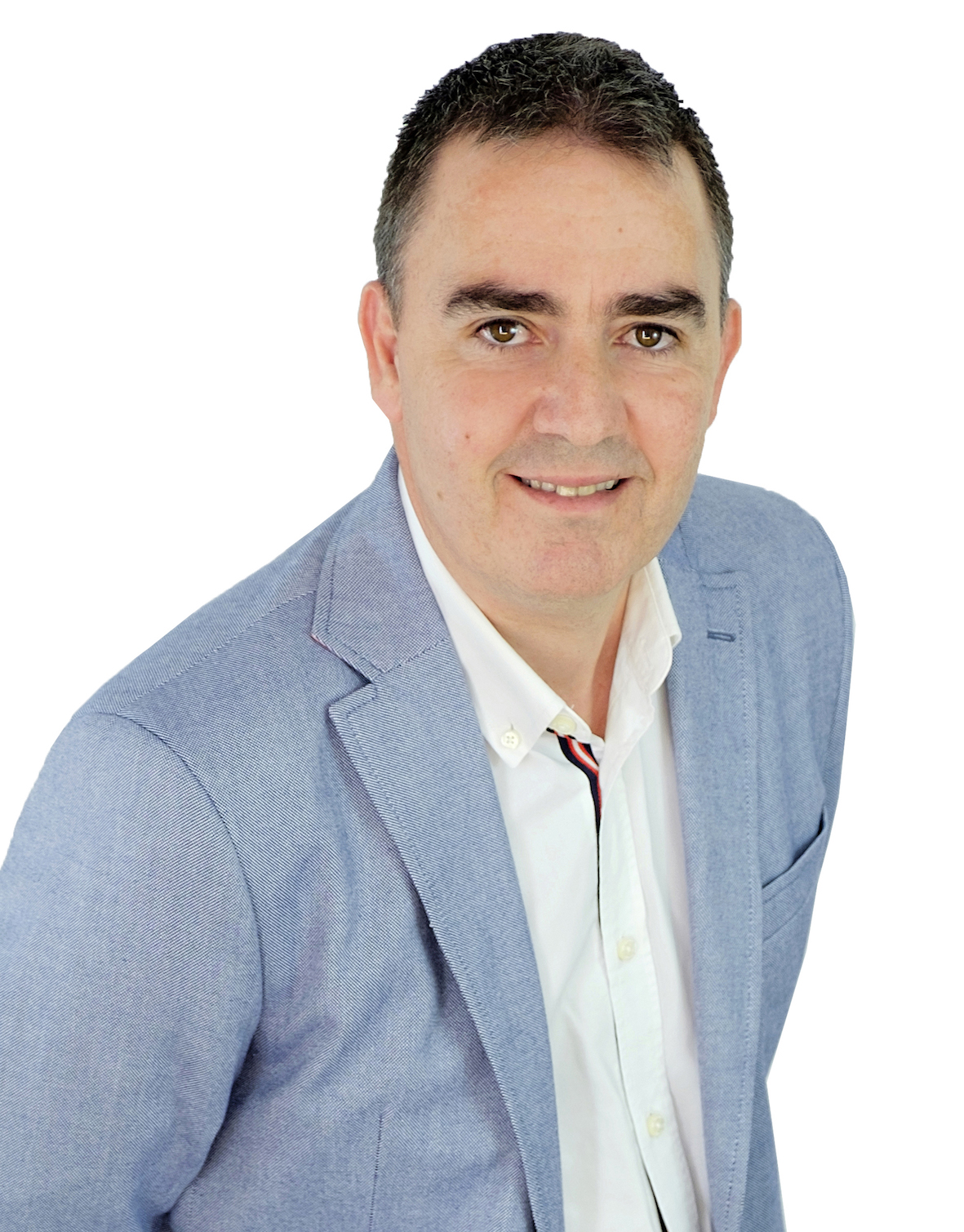